Unfortunately, due to vendor restrictions we are unable to sell this brand within Australia or the UK. If you have any questions, feel like you received this message in error or would like suggestions on other brands please contact us here.

Unfortunately, due to vendor restrictions we are unable to sell this brand within Australia. If you have any questions, feel like you received this message in error or would like suggestions on other brands please contact us here.

Unfortunately, due to vendor restrictions we are unable to sell this brand within your country. If you have any questions, feel like you received this message in error or would like suggestions on other brands please contact us here.

Unfortunately, due to vendor restrictions we are unable to sell this product or brand within California. If you have any questions, feel like you received this message in error or would like suggestions on other brands please contact us Here or call 1-888-627-3736 to speak to one of our experts.

Unfortunately, we are not able to ship this item outside of the United States.
If you have any questions please contact us at: 1-888-627-3736 or Email Us Here. Give us a call to get the best prices and parts for your build. Or, just call us with a cool racing story...either way we're here.

Ships for FREE by , when ordered within hrs and mins


Fits Your
MAP Loyalty: Earn $17.66 Toward Next Purchase! 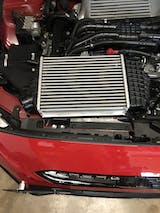 The "intercooler" I received was packaged extremely well, but it barely had any "bead" around the "hose clamp" areas, also had a few dings and bent fins.

I had some trouble getting the stock charge pipe to hold any more than 10 psi of boost before popping off no matter how I installed the cooler. lucky for me I ordered the Perrin Charge Pipe when I ordered this TurboXS Intercooler... unlucky for me, I ran out of daylight today so I will have to install and try the Perrin pipe tomorrow.

Test drive went good as long as I didn't go boost heavy, on one back and forth test driving "normally" I seem to be using about 6% less throttle when I went on my normal route fighting heavy head winds and a few hills hear and there. Don't know where all the heat goes in this thing, after a 20 minute test drive while trying to hold positive boost both "Hot" and "Cold" sides of the intercooler was ice cold to the touch, engine oil temps barely touched 201 F when they would usually be upwards of 207 F during a similar drive.

When I fist bought the car it would see oil temps upwards of 221 F doing this same drive but I helped a few things along the way; Lubegard "Liquid Wax Esters" engine oil and differential oil additive at 3oz Lubegard per quart of oil, 0w30 Euro Spec full synthetic oil, Mobil 1 gear oil, "bumper, headlight, and hood aero mods", and an AEM air intake helped get the car down to 207 F, so far a free flowing "intercooler" seems to help keep the oil temps down another 6 F during my "keep on the boost" test drive, and I normally drive using boost only when needed

Installed on a 2017 Subaru with the FA20 DIT engine... I recommend you get an aftermarket charge pipe to get the extra few inches worth of silicone biting down on the TubroXS "Intercooler"... now is also a good time to upgrade the hose clamps :)

Taking away 1 star for the lack of "hose clamp bead" and the few dings/dents... for $600 of someone's hard earned $$ the thing should look immaculate if y...

This was the final addition to my stage 2 mod list before my FXT was retuned. It was the missing link, pulling everything together, it made an incredible impact over the stock TMIC; really brought the charge pipe, TBE, TGV deletes to life. Shipping was fast and the piece was at a price I couldn't pass up, would have been such a weaker tune if I hadn't.

First time upgrading an intercooler and was a very simple straight forward upgrade. Paired this with my AEM Charge Pipe and really seems to make a difference on how quickly the turbo spools and keeps temps much cooler than factory TMIC (Can't wait to get the car in for a pro tune to really take advantage!). This was also my first transaction with MAPerformance and definitely won't be my last! Hope their inventory for the 2015 WRX keeps growing because they always seem to have not only the lowest available price but also are usually offering a discount code...sometimes up to an extra 10% off...#Unbeatable!!!!

1.) All MAPerformance in-house fabricated parts include a Limited Lifetime Warranty for the Original Purchaser. This warranty only applies to the original purchaser and is non-transferrable. If the product fails it would need to be determined by MAPerformance that it is due to manufacturing defects in materials or workmanship.

2.) This does not cover normal wear and tear. Improper use, modification, or abuse voids this warranty. MAPerformance will not be held responsible for additional costs due to the failure of a product (cost of sale, towing, labor, etc.). Warranty claims must be submitted to MAPerformance for review.


3.) You must create a support ticket to acquire your return authorization number prior to returning the product.

4.) Warranty claims will not be honored if the product was not purchased through an approved dealer.

For warranty evaluation please create a support ticket via this form Click Here For Customer Service.